When trying to implement IoT solutions, developers and solution architects face the dilemma of which IoT protocol to choose. Many protocols are available (such as MQTT, CoAP, DDS, AMQP and so on), making the decision difficult, time-consuming and prone to misjudgement. Although each technology has its merits and a place in the IoT ecosystem, few can claim the label of a device management protocol that allows the efficient connection and management of millions of constrained IoT devices in the field. This blog post explores the Lightweight M2M protocol (LwM2M) that is used as the foundation protocol of the Pelion Device Management Service of the Pelion IoT Platform and then walks through an example running the Pelion Client to demonstrate the LwM2M concepts “in action”. Then, this post describes the value-added services provided by the platform on top of the LwM2M foundation.

Let's start first with the basics of device management.

A device management protocol should provide the following:

The scope of a device management protocol is wide and encompasses all the real-world” issues IoT developers face when trying to efficiently and scalably manage their production devices in the field. OMA SpecWorks, a standardization body formed by a number of companies (including Arm) started a combined effort in 2013 to create a next-generation IoT device management protocol specifically targeted for M2M communication, which will serve the needs for the explosion of connected devices.

You may not know but OMA SpecWorks are the original creators of the OMA-DM management protocol that allowed mobile operators to efficiently manage mobile phones, PDAs and tablets. If you use a mobile phone, it's likely that you are already using the work the standardization body has done.

In February 2017, the first version of the specification was released, followed by three more revisions. A fourth is currently in the ‘candidate’ phase. Throughout the years, the specification has incorporated many technological advances and improved a number of areas as part of the feedback gathered by the increasing number of companies deploying LwM2M in production. At the moment, LwM2M stands as a mature device management protocol, ready to be deployed in the field.

Let's have a high-level look at how LwM2M works starting with the "interfaces" concept.

If the word specification scares you, fear not! The LightweightM2M specifications are easy-to-follow and well-written documents and if you have a basic technical savity you can easily follow along and understand the internals of how LwM2M protocol works if that interests you!

Architecturally, LwM2M is a client-server protocol. The IOT device plays the role of the client while the server is the Device Management server where devices register, making them available to be managed. The communication between the two is bidirectional; a device reports back information either as a response to a request the server initiates or on a predefined time interval. 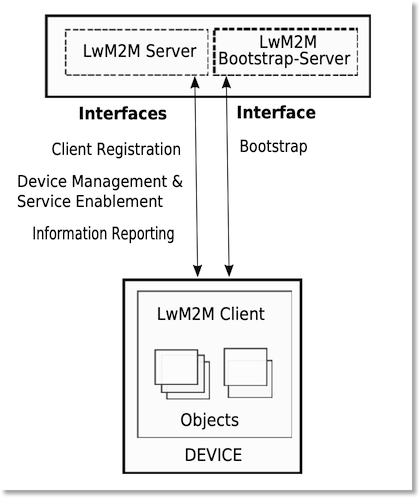 Underneath, LwM2M relies on the IETF standardized CoAP protocol to provide the semantics and structure of how the different parties should communicate. CoAP itself is a specialized protocol, where the efficiency of the communication (to allow it to run on lossy networks) and of the runtime (to allow it to run on low-power constrained devices) played a vital role in its development. You may think of CoAP as analogous to the HTTP protocol (in fact it is modelled very closely), which defines the structure of the communication, and LwM2M as the Web browser that builds on top of it to provide value-added services (or whatever the application is that is based on HTTP).

The diagrams below depict the protocol stack of LwM2M:

First are “Objects”, described in detail later, which are the managed properties the device exposes to the outside world. Because LwM2M is based on CoAP, it inherits its properties, such as UDP as the transport protocol and DTLS for securing the path. SMS may feel strange to you, but LwM2M was designed to operate on that transport, too. (The OMA-DM protocol, a precursor to LwM2M, might played a role here!). In more recent versions of LwM2M (v1.1), the protocol introduced support for TCP as the communication protocol (following the advancements of CoAP), as well as catering to the Low-Power Wide-Area Networks (LPWAN) that are starting to appear around us (such as NB-IOT, LoRA and so on).

If you are in the market looking for solutions on how to best connect your devices using LPWAN technologies, Pelion Connectivity Management can be a great starting point. We'll love to hear from you and your specific use cases and problems you are facing! 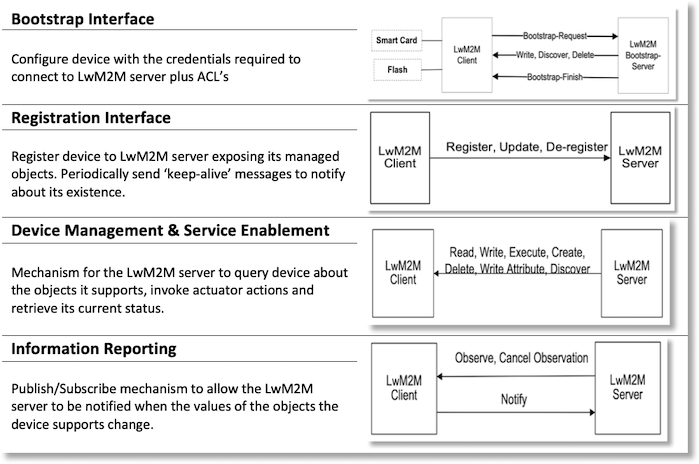 One important characteristic of LwM2M is that it opted to use a standardized format to describe the “Objects” a device supports based on the work done by the IPSO Smart Objects working group (now part of OMA SpecWorks). This was done deliberately to allow maximum interoperability between devices from different vendors. As long as vendors supported this common format, their devices can be easily plugged in and communicate with other devices that supported it.

You can find a list of current registered IPSO Smart Objects here.

Let’s see what an “Object” looks like when extracted from the OMA SpecWorks Registry. Below is a description of the “Temperature“ Object, used to report measurements of a temperature sensor: 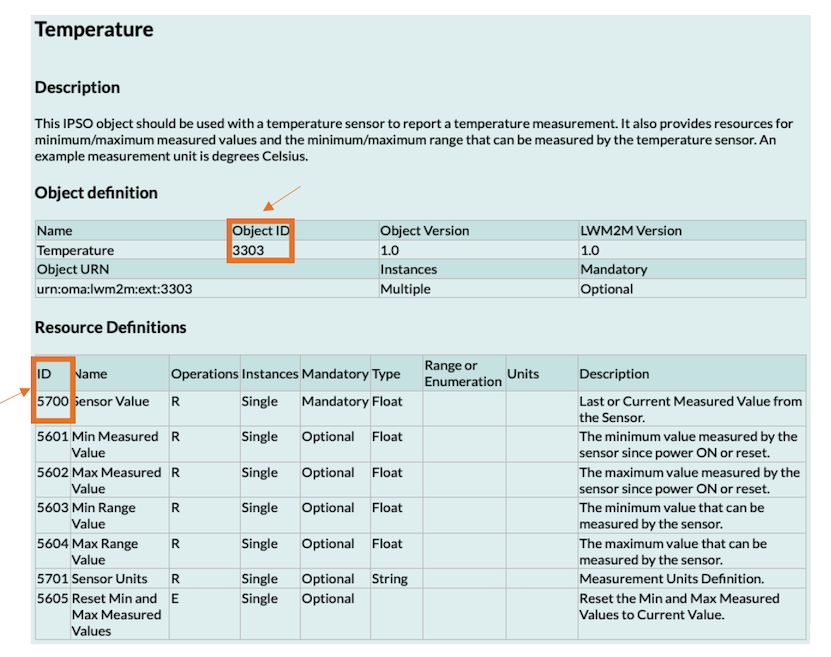 Each “Object” is globally assigned an ID, and it can contain one or more “Resources” describing its properties (which themselves are assigned an ID).

During the ‘Registration’ phase with the LwM2M server, the device indicates the list of Objects it supports: 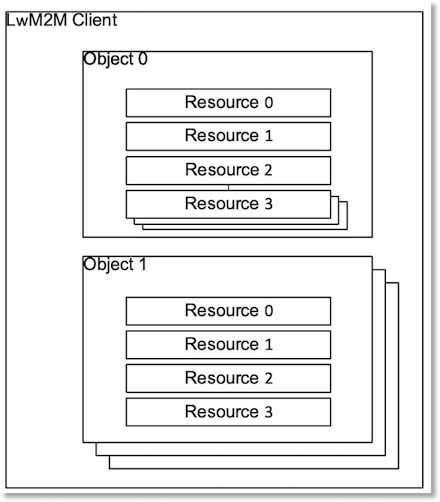 You can use the IDs for Objects and Resources to construct a URI targeting a specific resource or Object you would like to access with the management interface.

Notice the similarities with web addressing. As we described earlier, LwM2M relies on COAP protocol, so it adheres the REST paradigm to access the properties of a device.

The specification predefined eight standard Objects that every LwM2M implementation must adhere to, so the IPSO Smart Objects working group and external vendors can step in and provide additional Objects to suit their specific needs. Below is a list of those standard objects defined by the specification: 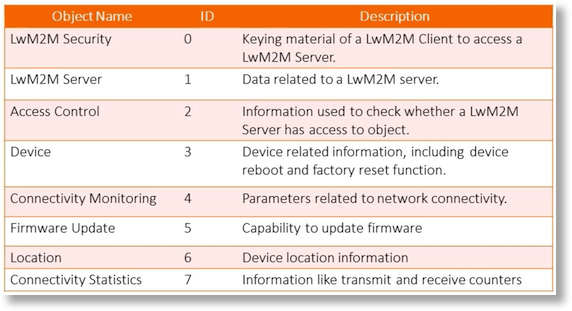 Now that this post has discussed the basic concepts behind LwM2M protocol, it will show through an example how those concepts translate in action using the Pelion IoT Platform. The official reference example, provided by the platform, connects to Pelion Device Management Service and interacts with the device’s Objects and Resources. This tutorial uses the Pelion Device Management Portal to interact with the service, but you can also choose to use the exposed API's provided, in case you need to develop custom integration points or web applications on top of the service.

For an example integration with the Device Management Service, check the Arduino use case published in our blog.

This demonstration uses an ST Discovery-L475E-IOT01A board, but you can use the provided example to connect and manage any device, ranging from low-constrained devices (such as Mbed Enabled or Amazon FreeRTOS compatible boards) to mid-range devices (such as Raspberry Pis and generic Linux boxes). See our documentation for instructions on how to get started on each platform.

This tutorial demonstrated the most basic operations of LwM2M, mainly to Read/Write and Execute an action on a Resource. Please see our documentation for more detailed information regarding managing resources.

Building on top of LwM2M

Having LwM2M as its foundation protocol allows the Pelion IoT platform to enjoy the benefits of a mature and open standard device management protocol developed in cooperation with many companies already deploying it in the production field. On top of that, Pelion IoT Platform introduces value-added services that solve issues our customers are facing when trying to deploy real-world IoT solutions.

Upcoming blogs posts will cover in detail the different value-added services provided by the platform and how each one helps solve real-world IoT deployment issues. In the meantime, we provide free-tier access to Pelion IoT platform, so you can easily get started. Why not give it a try?

This site uses cookies to store information on your computer. By continuing to use our site, you consent to our cookies. If you are not happy with the use of these cookies, please review our Cookie Policy to learn how they can be disabled. By disabling cookies, some features of the site will not work.